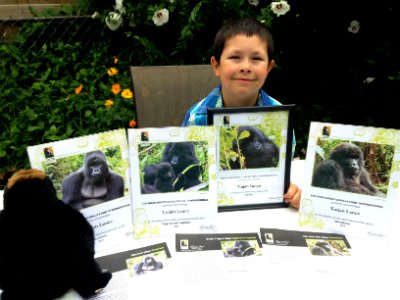 The Dian Fossey Gorilla Fund’s work is made possible largely through long-term support, donations and individual fundraising—and it’s always particularly inspiring for our organization to see an extraordinarily young donor fundraising for our cause and for the well-being of gorillas. Trajan Lance is one such example, and describes the population increase in mountain gorillas as a reason to do more work and increase fundraising.

Trajan used his 9th birthday this May as a gorilla fundraiser, after he and his mother created a website and promoted it on Facebook and through email. His initial goal was to raise $760 to adopt a mother/infant gorilla pair and a silverback mountain gorilla from the Fossey Fund, as well as 12 western lowland gorillas at the Oklahoma City Zoo, but he surpassed his goal by nearly $200!

Trajan recalls being first inspired by gorillas when he was 3 years old and likes them because of their close connection with humans and for their behavior. “My favorite thing about gorillas is how playful the babies are and how they act like us when they are upset or playful and how they show affection for one another,” Trajan said.

For Christmas 2014, Trajan received a Fossey Fund mountain gorilla infant adoption and has been inspired to do what he can to raise money since. Already looking ahead to his next fundraiser, Trajan hopes to participate in a cell-phone recycling collection and to teach his homeschool group about conservation.

Trajan, who is holding out to become a junior curator at the Oklahoma City Zoo once he turns 14, hopes to study gorillas later in life. “I hope to be a scientist and conservationist like Dr. Tara Stoinski,” he said, referring to the Fossey Fund’s president and CEO/chief scientist.