(This is the third of a five-part series.)

Here is a little info to start off Day Two. The mountain gorillas are in the Virunga Mountains in Rwanda. These mountains have eight major volcanic peaks. The six in the middle are extinct and the other two remain active, with notable eruptions in 1912, 1938, 1948, sometime in the 70’s and 2002. Conservation protects the mountains’ alpine vegetation as well as wildlife including the gorillas and golden monkeys.

Now, here is some info about trekking. For those of you who don’t know, trackers follow the gorillas and relay messages to the rangers. When you trek, a ranger and a tracker with a gun (to scare off the scary buffalo) walk with you. They know the general direction of the gorilla family you are visiting and your path is tweaked according to the messages received from the trackers. Sometimes the gorillas are on the move so it might throw a little curve at you such as having to double back.

You are only allowed one hour with the gorillas. You are supposed to stay seven meters away from them but apparently the gorillas don’t know metric. Sometimes they wander right by you. Some of the rangers are very strict and if a gorilla is approaching they will make you move back slowly. Others, from what I hear, are not that strict and tourists have been touched by gorillas. Sadly, I was with the strict rangers both days, haha! 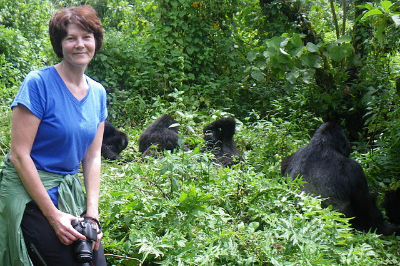 And so, I mentioned in my last email that Day One of the trek was easy for me and that perhaps I would try for a longer trek on Day Two. When I started reading about mountain gorillas years ago, I always wanted to see the Susa group in Rwanda. [Editor's note: The Susa group is habituated to the presence of tourists.] Well, be careful what you wish for. I was put in the Susa trek today and I paid dearly for it. It took three hours to get to the gorillas…AND IT WAS ALL UP HILL. I thought I was going to die a couple of times. You have to have some major cardio/respiratory fitness to do it. Many people were commenting about how hard it was to catch their breath and that their legs felt super heavy. I didn’t really pay much attention to anyone else. I was too busy contemplating how they might get me down via stretcher!

Going down wasn’t much better. Sure, your heart and lungs aren’t working nearly as hard but down is hard on the knees and hips. The mud was very slippery and almost everyone took at least one fall. I was the only one who hired a porter so I slipped lots but never actually fell because he saved me every time. Unfortunately, one of my slips caused a knee and a hip to give out. So much for being pain-free! When you are done with your trek you are awarded a certificate that says what group of gorillas you saw. I’ll be framing the Susa one!
The Susa group has 33 members with three silverbacks and loads of lovely ladies. One of their claims to fame is the fact that they have two sets of twins. Twins are rare enough but even rarer when both twins survive. One set is seven or eight years old and the other set is five months old. Usually if a twin dies it is much younger than five months so the rangers feel they will both survive. Imagine how difficult it is for a mother gorilla. She walks on all fours so it is very difficult to manage two babies. Typically the mother will abandon one twin.
You can’t imagine our relief when we finally reached the gorillas. When I saw Kwitonda yesterday, 17 of the 22 gorillas were all together. We got to stay in the same area for our hour. We would trade off positions so everyone could see but otherwise it was easy. Well, Susa couldn’t be easy now could they?

After the crazy trek up to see them I was very much hoping they would be hanging out all together. They weren’t! We would visit one little “pod” of gorillas and then we’d climb up, down or around to another pod. Then we’d move on again. Reaching each new location was more difficult than the last. We worked hard for this viewing. And as a note, the porters can’t go in to see the gorillas. You leave your backpacks, porters and walking sticks a short distance away. All you can bring is your camera equipment. It was difficult without a walking stick but a very tall tracker helped me.
Each pod had a different cast of characters. One pod had the number two in command silverback, a couple of ladies and some kids. Another had the alpha male and a juvenile. You get the picture. It was nice to see some different interactions. At one point a baby, probably about six months-ish decided to come over to check me out. I was excited that it was coming straight for me (I was crouched down) but of course I had the strict rangers. I was immediately told to stand up and step back. In reality that is the smartest thing to do…especially when mom is so close. She came over and scooped up the baby and let out a shriek. Good mother!!
I have to thank the Dian Fossey Gorilla Fund once again for this amazing trip. Tomorrow I trek for golden monkeys. Will my body hold up to the challenge? Of course it will. If there are monkeys to see I will get there!!