After several days of dramatic interaction between lone silverback Tuyizere and the Titus gorillas, it all came to a head yesterday evening when the entire group turned on the loner, screaming and mounting an all out physical attack. 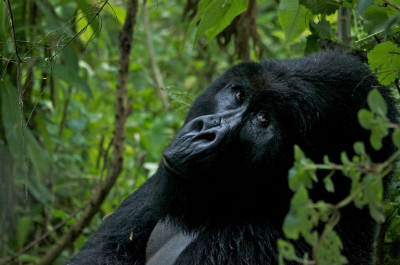 Dominant silverback Rano had maintained his protective stance between Tuyizere and his group members throughout the day, in particular, guarding his two females, 7-year-old Ubufatanye (who recently transferred to Titus group on Oct. 9) and 11-year-old Imvune.

Tuyizere has been following Titus group for three days now, forcing the group to walk a long distance to avoid him. The Fossey Fund Karisoke trackers found the group late yesterday morning, several kilometers into the bamboo zone between the Mudakama and Muguri area. Soon after they arrived, the lone silverback silently slipped into the group, sending silverback Rano into a territorial frenzy. Assuming his impressive strut stance posture, Rano began displaying and charging, with Tuyizere mirroring his behavior with equal intensity. Turakora, the second silverback in command, and blackbacks Pato and Urwibutso joined in on the interaction, screaming and displaying aggressively to prevent Tuyizere from coming any further into the group.

Fossey Fund trackers were surprised to see the two females (who had previously been seeking protection behind the males) come forward and join in on the interaction. Female Ubufatanye assumed her strut stance and moved towards Tuyizere, reaching out and touching the silverback. Rano quickly intervened, placing his massive body between the two. At that time, all seven members of the group moved in on Tuyizere, screaming and biting him. It seemed to be a violent attack and Tuyizere sustained several superficial wounds on his back before he was able to break away from the angry onslaught, still displaying in frustration about 50 meters away from the group.

The trackers left the group late yesterday afternoon once the gorillas seemed to calm down and Tuyizere had maintained his distance, deterred from his intrusion attempt for the time being.

Rano has experience with this scenario, since he himself rejoined Titus group after two years as a lone silverback (and a persistent campaign to get back into the group). Rano moved into the group's lead position after the death of his father and former dominant silverback Titus. Interestingly enough, Tuyizere, also the son of Titus, left the group to become a lone silverback in September 2008. It seems he wants back in, and may be after his brother Rano's high ranking position.

Today, the drama continued and Tuyizere and Titus group were approached this afternoon by yet another lone silverback, who was not immediately identified. It seems that Tuyizere was temporarily successful in his attempt to gain a female companion and the Titus trackers observed that Ubufatanye was no longer with her group around 3 p.m., but near Tuyizere, about 50 meters away. With the threat of the additional lone silverback, Tuyizere and Ubufatanye were following the group this afternoon, searching for protection against the new intruder.

Around 4 p.m., the Titus gorillas abruptly broke into an all-out run through the bamboo back towards Cundura hill, with Tuyizere and Ubufatanye on their tail and the unidentified silverback in pursuit of them. Trackers reported that Tuyizere stopped suddenly and turned to face this silverback, prepared for a fight and mounting a vigorous display. With Tuyizere distracted, Ubufatanye took the opportunity to escape and continued running through the bamboo towards her group. When the trackers left the group, Ubufatanye was still with her other group members, leaving the two lone silverbacks to fight it out in her wake.

Photo and databased work later determined the identity of the "unknown" silverback to be Turatzinze, a silverback who became solitary in 2006 and is known to us. More to come soon!