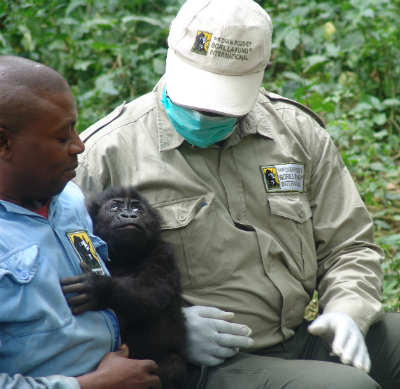 Two gorilla infants that have been cared for by the Dian Fossey Gorilla Fund and its partners for the past three months since they were rescued from poachers have completed their final quarantine exams. However, DNA tests must be completed before clearance can be granted for the two orphans to move from the Senkwekwe sanctuary run by the Congo park authority (ICCN) in Rumangabo to the Gorilla Rehabilitation and Conservation Education (GRACE) center further to the west. The DNA testing will confirm their subspecies as Grauer’s gorillas (the Senkwekwe sanctuary harbors mountain gorillas, while GRACE receives only Grauer’s). ICCN is expected to issue a permit shortly for the DNA samples to leave the country for analysis. Veterinary care is provided by the Gorilla Doctors.

The orphans, named Isangi and Baraka, are doing well, according to the Fossey Fund’s Congo Program Director Urbain Ngobobo. “The caregiver Janvier Kayivumba says that he and the other three caregivers are happy that their charges have recovered their health and energy, especially Baraka, who was in very bad condition when she arrived. However, it will be tough on them to see the little gorillas leave. He says the infants and their caregivers have developed an in-depth bond similar to that between gorilla mothers and their infants. In fact, the caregivers say gorilla infants show more affection than human babies do, and many memories of Isangi and Baraka will stick in their minds after they are gone.”

Isangi is a female about 10 months old. Baraka, also a female, about 7 months old, was found to be anemic and malnourished when she was first examined, but an iron supplement corrected the anemia and her appetite has improved. She also received medication for two episodes of diarrhea. Both infants will continue to be closely monitored, including daily temperature and weight checks. The caregivers ensure that the infants’ stress levels are low, so they can recover from the trauma of capture and seeing their family members killed (as almost always occurs when poachers take an infant gorilla) and that they engage in activities that help them develop. 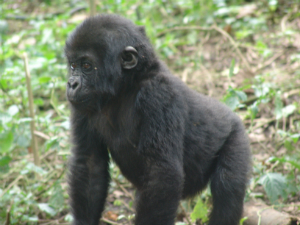 If the genetic testing confirms that both are Grauer’s gorillas, as expected, they will be joined in their journey to GRACE by Ihirwe, another orphaned Grauer’s gorilla in care at the Fossey Fund’s quarantine facility in Kinigi, Rwanda. GRACE currently houses 11 other Grauer’s orphans of various ages. There, they live in a wooded setting where they can develop skills such as foraging and nest building and, most importantly, learn to live in the kind of social group that helps gorillas survive in the wild, with a view to their eventual release in the forest.

GRACE was created at the urging of ICCN on land donated by the Tayna Center for Conservation Biology, adjacent to the Tayna Nature Reserve in eastern Congo. The center was initiated by the Dian Fossey Gorilla Fund International, with funding from the U.S. Fish and Wildlife Service; design and construction assistance from The Walt Disney Company’s Animal Programs; and technical expertise from Pan African Sanctuary Alliance (PASA). GRACE is currently overseen by GRACE Governing Council members including The Walt Disney Company, the Dian Fossey Gorilla Fund International, Dallas Zoo, Denver Zoo and Houston Zoo.