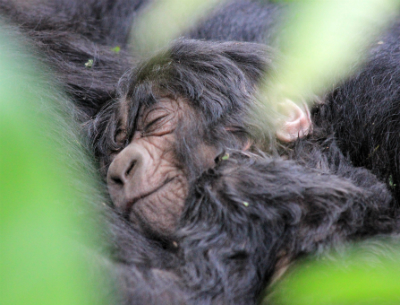 Many animals in the wild experience high infant mortality, and the same is true among the mountain gorillas we monitor. The last few months have been marked by the unexpected deaths of several young infants, due to a variety of causes, though some remain unclear.

The first was 1-year-old Nakure, who was born to Inziza of Ugenda’s group in Aug. 2013. Nakure was reported crying during daily monitoring on Aug. 16, after being unable to nurse properly. The infant was found dead on Aug. 17. A necropsy and Gorilla Doctors veterinarians reported pneumonia as the possible cause of death.

A few weeks prior to Nakure’s death, Ugenda’s group was affected by respiratory problems. All of the gorillas in this group had cold-like symptoms of coughing, sneezing and running noses, including mother Inziza, who had symptoms the longest. However, we don’t know if there is a direct relationship between Nakure’s premature death and the recent bout of illness in the group.

The second infant who died recently was Kubana’s infant Ubukwe, born in March of this year, in Titus’s group. This death came unexpectedly when Fossey Fund trackers saw Kubana carrying the deceased infant on Sept. 4.

The group had appeared calm after a transition period following the death of dominant silverback Rano that occurred at the end of July 2014. The remaining three silverbacks formed a peaceful collaboration to lead the group, though with an unclear dominance hierarchy. There were concerns for the survival of the infant, who could become a victim of infanticide by outsider males, which is common during transitions in leadership, but this did not seem to be the case. The postponed necropsy did not reveal any definitive cause of death.

A third case was female Nzeli’s infant, who died on the same day of his/her birth. Nzeli had recently transferred to Isabukuru’s group from Bwenge’s group. The body could not be recovered, so the cause of death will remain unknown; however, the infant did not appear to be premature and there were no visual signs of injuries that might be related to infanticide.

Most recently, 3-1/2-year-old Susuruka, who had not been doing well and was visited by veterinarians twice in mid-November, was found dead by our trackers on Nov. 15. A necropsy is being performed by Gorilla Doctors to determine the causes of death, but she had been suffering from traumatic changes in her group and the transfer of her mother (Faida) out of the group.

Luckily, deaths are often balanced by births, and indeed a newborn arrived in November, to mother Kurinda in Ntambara’s group. This birth was extra special because the delivery was actually witnessed by Fossey Fund data technician Antoine.