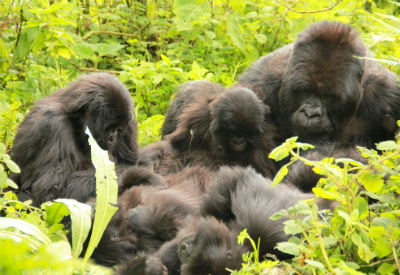 Today and yesterday, our trackers did not locate Gushimira and the three females he recently acquired from Ugenda’s group (Kanama, Kurudi and Inziza). It seems that the newly formed group had changed their ranging area. We will keep looking for them every day, hoping to find them soon.

Ugenda’s group (without females) seems to be doing fine. Sabato, Kurudi’s infant, is with silverback Ugenda. Ugenda made a few non-directed displays today and yesterday, possibly addressed to Gushimira and the females.

Another issue: Infant Amatwara, now in Ntambara’s group with his mother Bishushwe, was found injured today. He is limping and has several bleeding superficial wounds. Bishushwe and her infant were originally members of Urugamba’s group, which merged with Ntambara’s group on Jan. 28. Today’s injuries suggest that Amatwara was involved in a serious fight. Because we did not observe the fight, we can’t confirm the intention or the context of it.

Tomorrow Gorilla Doctor veterinarians will go with Fossey Fund staff to assess Amatwara’s health. Ntambara’s group is on the top of Mount Visoke, so it will be a long trek!