Thirty-eight-year-old Puck was one of the most studied mountain gorillas in history, and was the oldest living member of the largest family of gorillas ever studied as well (called the Effie clan). She died on April 10, with preliminary necropsy reports (carried out by the Mountain Gorilla Veterinary Project) showing cancer in several locations of her body. 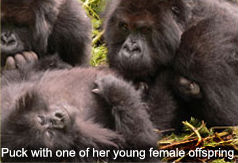 Puck was one of the gorillas who was first observed by Dr. Dian Fossey, when she was born on Dec. 15, 1968. Her mother, Effie, was then the dominant female of a group Fossey called “Group 5,” which later split into two groups we study today – Shinda’s group and Pablo’s group.

Puck is mentioned several times (and with affection) in Fossey’s book Gorillas in the Mist, and Fossey notes that she had thought Puck was a male – right up until the time she gave birth to her first offspring. This first offspring (which Fossey named “Cantsbee” because she exclaimed “It can’t be” when the supposedly male Puck gave birth), is now the dominant silverback of Pablo’s group, which is the largest gorilla group ever recorded and is closely monitored by our staff at Karisoke every day. 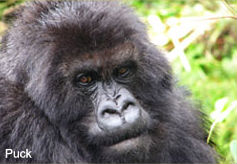 Puck also had several other offspring as well as grandchildren, and most of them spent a lot of time with her. In particular, her youngest offspring, female Nyandwi, was often seen close to Puck and tried to help her keep up and not get separated from the group when she became weak on her last day of life.

The Karisoke staff are proud to have been able to follow this historic gorilla with a strong and interesting personality. She will be remembered with affection and missed by all who knew her.