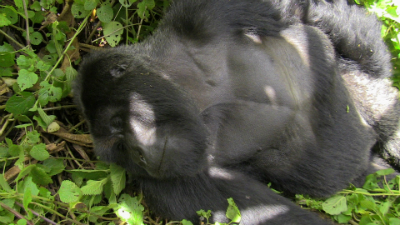 Because gorillas have such long lifespans, even though the Fossey Fund has been studying them at the Karisoke Research Center for more than 45 years, there are some kinds of events that we still have had few opportunities to observe. The death of a dominant silverback is one of these.

The death of 21-year-old silverback Urugamba this January was only the seventh case of its kind that the Fossey Fund has observed. After Urugamba’s death, we watched his group closely with a great deal of curiosity about how the surviving gorillas would rebuild their social world and regain the security they once enjoyed under his leadership.

Urugamba’s group included only two females and several immature gorillas. Most of the group members joined Ntambara’s group during an interaction just a few days after Urugamba’s death. But one female, Bishushwe, with a very young infant, refused to join Ntambara’s group, probably fearing that the silverbacks would kill her infant, Amatwara. Since then, we have followed Bishushwe’s trails, but have not seen any signs that she has joined another group or a lone silverback.

Update: Veterinarians from the Gorilla Doctors have conducted a necropsy on Urugamba and determined that he had a colonic perforation (tear in the large bowel) that caused peritonitis (infection in the abdomen) and subsequent sepsis. Samples collected during the necropsy are being sent to the University of California at Davis where the Gorilla Doctors’ Veterinary Pathologist Dr. Linda Lowenstine, will process and examine them histopathologically.

Urugamba’s death and its aftermath had us looking back in the long-term records to see how the other six cases unfolded. Much as one might try to discern a reliable pattern in group behavior after the death of the dominant silverback, it was clear that much depended on the context. Among the other six cases we have observed, if the group did not include a male mature enough to assume the leadership the females usually joined another established group. Sometimes this resulted in the new group’s males killing their infants (so the females would become fertile again).

The males of Uncle Bert’s Group 4 travelled together for several years as an all-male group after the females left, which was unusual. (Dian Fossey wrote about Uncle Bert's death and its aftermath in Gorillas in the Mist.) After Shinda died in 2008, the two remaining mature males divided the group between them. In the case of Titus, his son Rano – whose challenge had contributed to the ailing Titus’ death in 2009 – was able to take over the group.

Because gorillas are so highly social and the dominant silverback is the central figure in gorilla society, observing what happens after the death of a silverback, while sad, can provide important insight into how gorillas make decisions about structuring their social worlds. As we collect more and more case studies of these rare events over time, we hope to develop a better understanding of gorilla behavior.