Yesterday in one of the groups the Fossey Fund monitors daily in Rwanda, our trackers found juvenile gorilla Itorero caught in a snare. The gorillas in the group had already cut the rope from the snare with their teeth, but the remainder of the rope was still tight around his wrist and needed to be removed. Every effort made by Itorero, who is 4 years old, to remove the rope from his wrist just ended up making it tighter, causing additional stress and potential injury.

An intervention with veterinarians from Gorilla Doctors was planned for today and was successfully carried out. Ten of the most-experienced Fossey Fund trackers were assigned to this intervention, including Jean Damascene Hategekimana, known as "Fundi", who is approaching his 23rd year as a tracker with the Fossey Fund. Their critical role was to keep the dominant silverback, Musilikale, and other group members away from the veterinary team during the intervention. While this role is always challenging, it was particularly so today, because Musilikale is one of the more aggressive silverbacks we monitor. 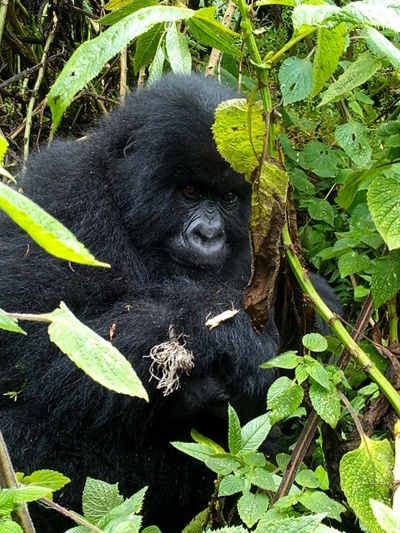 The group was ranging very far away, and the team reached them around 11 a.m. Silverback Musilikale was indeed very aggressive and repeatedly charged and screamed at our trackers, as the veterinarians waited for an opportunity to safely sedate Itorero. Once Itorero was asleep, it took only a few minutes to remove the snare. As he awoke, Musilikale carried him back to the group. When our staff left, Itorero was safely reunited with his mother and other group members.

"Everyone was a real hero here," said Veronica Vecellio, Fossey Fund gorilla program manager. This was the first gorilla among our monitored groups to be caught in a snare since April 2014.

Click here for an update and other good news.