Not far from the village of Nkuba, in a remote area of the Democratic Republic of the Congo where the critically endangered Grauer’s gorillas roam, lies a two-and-a-half acre field—just a bit bigger than a soccer field­—that holds special promise for scientists and conservationists.

The Fossey Fund created this 100-by-100-meter botanical garden near our office using gorilla dung that our trackers and researchers collected in the field. But why go to all the trouble of collecting and transporting poop?

The “poop garden” project was born as a scientific experiment to generate information and data on the germination rate of plants grown from seeds found in Grauer’s gorilla dung. Using this information, we can better understand the role of gorillas in seed dispersal and forest maintenance. The plants grown from these seeds also provide important information on the gorillas’ diet, allowing us to identify which plants this little-known gorilla subspecies relies upon. And because we can classify gorilla dung based on its size (e.g., silverback poop is bigger than that of an adult female, which is bigger than that of a juvenile), we can also answer questions about how diet may vary according to sex and age and also by season.

But that’s just one part of our poop garden.

The garden is divided into three parts. The first part is made of plants grown from seeds found in gorilla dung. The Fossey Fund field team regularly follows three to four Grauer’s gorilla groups; droppings are taken from nest sites and geographic coordinates are recorded, along with the date, habitat type, name of the gorilla group and rough age/sex class of gorilla. The gorilla droppings are placed in the garden and covered with leaves to create a microclimate favorable to the germination of seeds.

“When the seeds sprout, students and scientists examine them to learn more about what the gorillas seek to eat,” explains Urbain Ngobobo, director of the Fossey Fund’s Congo programs. “This garden is helping young African scientists develop the skills and knowledge they need to become conservation leaders—a key Fossey Fund goal.” In addition, the establishment of this botanical garden is part of the Fossey Fund’s strategy of “bringing the forest back to the communities,” reversing the tendency of local community members to enter the forest. It is also a laboratory, where students can learn about the role wildlife plays in forest maintenance. It is the foundation of the Fossey Fund’s “school in the forest” strategy.

The other two parts of the garden have a more immediate, practical purpose: They are used to grow locally prized medicinal plants and edible wild fruits, which can be distributed to community members near the Nkuba Conservation Area (NCA).

The garden complements our community engagement program activities in the NCA with seed production and distribution as well as a bee keeping site. A local cooperative, UTDEP-WOMAN, manages bee keeping, honey collection and monthly monitoring of the garden; coop members will be the first beneficiaries of income from selling the honey and seeds. In addition, the garden project reduces pressure on the gorilla habitat because community members who used to go to the NCA for non-timber forest products (edible wild fruits, medicinal plants, mushrooms, etc.) will find easy access to these commodities once the seedlings are planted in their plots.

The entire garden is also used for our environmental education programs in local schools, allowing us to teach students and future scientists how gorillas help create and protect the diverse ecosystem in and around their habitat.

“Without local community support, we wouldn’t be as successful in our work to protect the critically endangered Grauer’s gorillas,” says Dr. Tara Stoinski, CEO and chief scientific officer of the Fossey Fund. “This garden doesn’t just help us understand and protect the gorillas. It helps give community members a means to support themselves and feed their families, and it gives them pride in ‘their’ gorillas. It helps us build a better future, both for the Nkuba community and the gorillas themselves.” 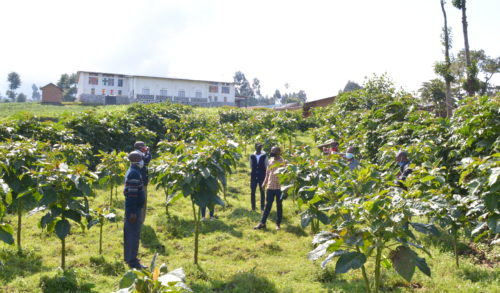 Check out the unbelievable work of the school nature clubs around Volcanoes National Park—these children and their teachers are true... 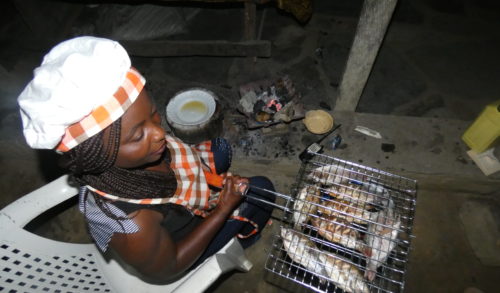