The Dian Fossey Gorilla Fund operates community conservation education and awareness programs in the areas where we work, to help local people learn more about the important environment around them, as well as how they can help protect the national park that is home to endangered mountain gorillas and other important species. 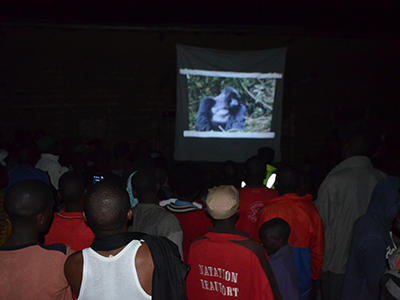 One program that has proven to be very popular is the showing each summer of selected movies that feature gorilla conservation. Supported by Fossey Fund sponsor Nature’s Path, this year more than 4,000 people from 12 local villages attended our movie showings. Both movies were translated into the local language, Kinyarwanda.

The first film shown was the documentary “Hope,” which was produced by Fossey Fund partner Craghoppers and narrated by Sir David Attenborough. It shows how Fossey Fund trackers and scientists work to protect the gorillas in collaboration with park authorities.

The second film shown was the PBS Nature documentary “Titus: Gorilla King,” which depicts the life of the late silverback Titus, and the many gorillas who lived with him.

Local people were excited to see these films, because most have never had the opportunity to see the gorillas in the forest, even though they may live close to the park. After each showing, Fossey Fund staff and local leaders held discussions with the community members about the national park and its biodiversity, speaking about the importance of gorillas and other species, the threats to their survival, and ways to help protect them and their habitat.