Has Pablo's Group Lost a Member? Rukundo Appears to Leave

Rukundo is a 15- year-old silverback in Pablo's group of mountain gorillas, which includes a total of 47 individuals. It is a massive group that includes the dominant silverback Cantsbee, along with four other silverbacks, Gicurasi, Gushimira, Twihangane, and Rukundo. There are also eight blackbacks (younger adult males) in the group. This makes for a complex situation, with many members and possibilities for interesting group dynamics, leadership changes, and mating issues. 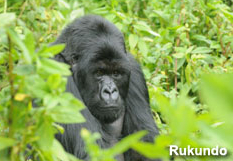 According to our staff at the Karisoke Research Center who work with Pablo's group, Rukundo is usually positioned at the edge of the group. There was a time when he was more playful and confident, but he seemed to have lost his confidence as he grew older and had to compete with so many adult males in the group. Usually, when there are so many males in a gorilla group, especially with more than one silverback, eventually some will leave the group and either become solitary males for a while or establish their own groups.

On March 1 of this year, Rukundo was reported missing from Pablo's group, which had happened before, and our trackers and researchers began to search for him separately. Since Pablo's group is so large it is not always easy to find all the individuals every day, but the trackers usually spread out to make sure they can locate each individual. Since Rukundo likes to spend a lot of time at the edge of the group he can be more difficult to locate. On March 4, a separate team of trackers was set up especially for Rukundo, while the regular Pablo team of researchers and trackers stayed with the main group. The special team searched all week, but without success. As of this writing, we have still not seen Rukundo in Pablo's group, which makes us think that he has finally left the group to become a solitary male silverback. 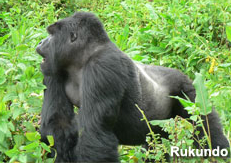 Rukundo was born on Nov. 7, 1994. His mother, Maggie, who is now in Bwenge's group and bringing up her newest child (born this year), comes from an impressive family background. Her mother Effie had a large continuous family that goes back to when Dr. Dian Fossey started her research in the 1960s. The name "Rukundo," in Kinyarwanda, means "love." He was given that name to symbolize love among all people after the war in Rwanda. The name also symbolizes the care shown by the Fossey Fund and the help the organization has given to the communities around Karisoke.

And it is with love and care that Karisoke staff will continue to monitor Pablo's group and see if Rukundo returns. It will be interesting to see if we observe Rukundo alone during tracking and the daily field research. Will he interact again with the group? Will he search for females to try and start his own group? Interesting questions that only time, patience and continuous observations can answer…