A newborn was observed today in one of the mountain gorilla groups monitored daily by the Dian Fossey Gorilla Fund. Young female Akamaro (9 years old) was observed with a newborn this morning in Isabukuru's group. This is the second infant born in Isabukuru's group in 2015, bringing the group's total to 18 gorillas. Although Akamaro is quite young for a mother, our field staff reports that she was confidently handling and moving with her newborn. 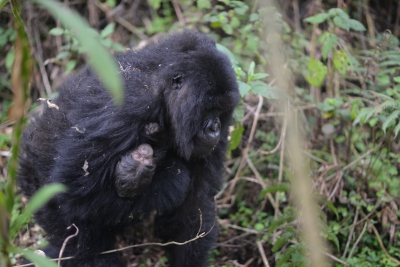 Dominant silverback Isabukuru was born in 1992. The group also includes a younger silverback, named Kubaha, as well as a variety of adult females and youngsters. So one day, the new infant should have plenty of playmates.

This newborn, along with eight other infants born in the groups monitored by the Fossey Fund during the past year, will be officially named at the annual Rwandan "Kwita Izina" naming ceremony, to be held this year on Sept. 5.