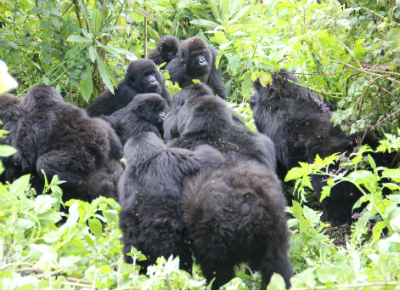 Although we have been expecting the group to eventually merge with another group or to encounter a lone silverback who might take over leadership, the team was completely surprised today when, in tracking Urugamba’s group, they encountered Ntambara’s group. Ugenda’s group was thought to be nearest to the remnants of Urugamba’s group, and since the two groups know each other well, we all hoped that if the females joined Ugenda their infants would not be victims of infanticide. Instead, a volatile interaction ensued between Ntambara’s group and Urugamba’s group that lasted at least four hours.

The two groups encountered each other at about 9 a.m. this morning. The three silverbacks in Ntambara’s group — Ntambara, Ugutsinda, and Twibuke — led the rest in pursuing Urugamba’s group, who initially tried to move downhill to avoid interacting. By 10 a.m. both groups were facing each other, and the silverbacks began a series of displays. Ntambara targeted female Bishushwe, who has the youngest infant in Urugamba’s group, Amatwara, who just turned 1 year old in November. Bishushwe was clearly very stressed, screaming, and running from Ntambara, who chased her and displayed by smashing vegetation, hitting the ground, and beating his chest. Bishushwe showed submissive behavior and finally took cover underneath a bush, where she began grooming her infant. Her fear is well founded, as her infant is very vulnerable to infanticide at its young age.

Silverback Ugutsinda spent most of his time targeting the female Pasika, who also has an infant, 3-year-old Turate. Pasika was also stressed, but remained closer to Ntambara’s group than did Bishushwe. Pasika usually allows Turate to play at some distance from her, but she kept a tight rein on him today, never allowing him to play with the other youngsters. Turate was not a target of any displays and was not harmed at all during the interaction — even going so far as to stare at and touch the silverbacks — but Pasika is probably wise to be cautious around the silverbacks for now. 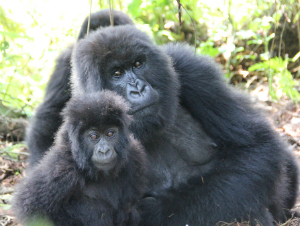 The difference in the behavior of the two females, Pasika and Bishushwe, is probably related in part to the difference in the ages of their infants, but may also have to do with their familiarity with the silverbacks in Ntambara’s group. Pasika spent several years with the same silverbacks while they were still part of Shinda’s group, before Shinda’s death and his group’s eventual split. Bishushwe, though she also lived in Shinda’s group, transferred into it only a year before the group split, so she does not have nearly as much experience with the individuals in Ntambara’s group as does Pasika.

Sub-adult male Inkumbuza also seemed to show some signs of stress, though he coped with the interaction very well. He seemed eager to develop bonds with members of the other group, so that in case the groups merged he would not be excluded by the silverbacks. He played with nulliparous (not yet a mother) female Kunga a lot during the interaction, probably because he had lived with her for years when he and Pasika were still part of Shinda’s group. He also engaged in play sessions with the other youngsters of Ntambara’s group, and seemed to be accepted by everyone. This is not entirely surprising given Inkumbuza’s gregarious nature. He is known for the unusual behavior of frequently transferring between Urugamba’s group and Ugenda’s group, a behavior not usually tolerated by silverbacks. Inkumbuza seemed to succeed because of his ability to maintain bonds with both dominant silverbacks, so it was interesting to see him carry over that skill during this interaction. Vecellio noted, however, that his play behavior seemed more urgent today than usual — as though he was making a lot of effort to bond with the members of Ntambara’s group.

Igisubizo, the juvenile son of Bishushwe, seemed to have a more difficult time integrating with the group initially and played less than Inkumbuza. He did not follow his mother when she ran from Ntambara, remaining instead with the rest of the gorillas. Hopefully, he will continue to remain with the group and develop some relationships that will help him settle in. 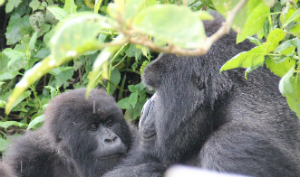 Interestingly, Vecellio notes that several of the silverbacks’ displays were non-directional, perhaps indicating that they were looking for Urugamba and expecting him to arrive eventually. They may not have realized that Urugamba’s group was truly without a silverback. Female Tegereza from Ntambara’s group was also very nervous during the interaction. She has a very young infant — the youngest of the Fossey Fund-monitored gorillas — and may also have thought that Urugamba was in the vicinity and that she would have to protect her infant.

The interaction between Urugamba’s group and Ntambara’s group was intense and rare to observe. Everyone at Fossey Fund is very interested to see how the situation will develop and whether they will stabilize into a single group. Urugamba’s team of trackers and Ntambara’s team will pair up tomorrow, with one looking for the night’s nest site and the other going to observe the gorillas. How close the gorillas nest to one another will be revealing of whether the two groups are indeed merging. We also hope that Bishushwe does eventually join the rest of the gorillas and that we find both infants safe tomorrow. If Turate and Amatwara have thus far managed to avoid aggressions by the silverbacks, they may make it through the merger unharmed.